Our client wanted to surprise his wife on her big birthday with an intimate party for family members. It needed to be visually stunning yet wow the 16 guests.

The Venue we chose was The Grove Hotel. The party started with canapes and cocktails in the Garden Room. Much to their surprise and delight, they were serenaded by the incredible Andre Saxman alongside a ballerina performance by the Black Orchid Ballerinas.

A chic art deco bar was sourced from the Great Hire, so guests didn’t have to leave the room for drinks. They were expecting to dine in the hotel restaurant so were surprised again when they were called for dinner and led through to the adjoining room. Unbeknown to guests the adjoining room had been transformed into a floral fantasy. We had all the guests pre-drawn by Vogue acclaimed artist Victoria Fitzroy, so guests were able to find their seats when they found their drawing. 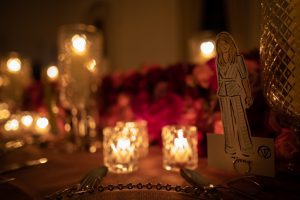 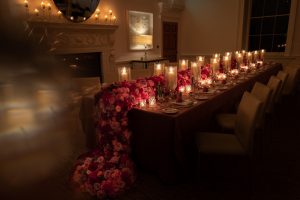 Acclaimed London florist Larry Walshe created an opulent full floral table runner with overflowing cascade to create immense drama using the birthday girls favourite flower the red rose. Mixed into the design were opulent rare orchids and a plethora of crystal candles and lanterns were places alongside the design to give the dreamiest lighting. Stunning place settings with glass bead chargers were laid topped with a gently spritzed napkin and a single pink rose. Specialist floor-length mulberry urbane linen was used to give the most opulent look to the table. As guests took their seats to begin dining, they were literally blown away by the table. Tears of happiness and laughter rung out throughout the room. As the excitement died down guests were then entertained by Andre saxman whilst they dined. 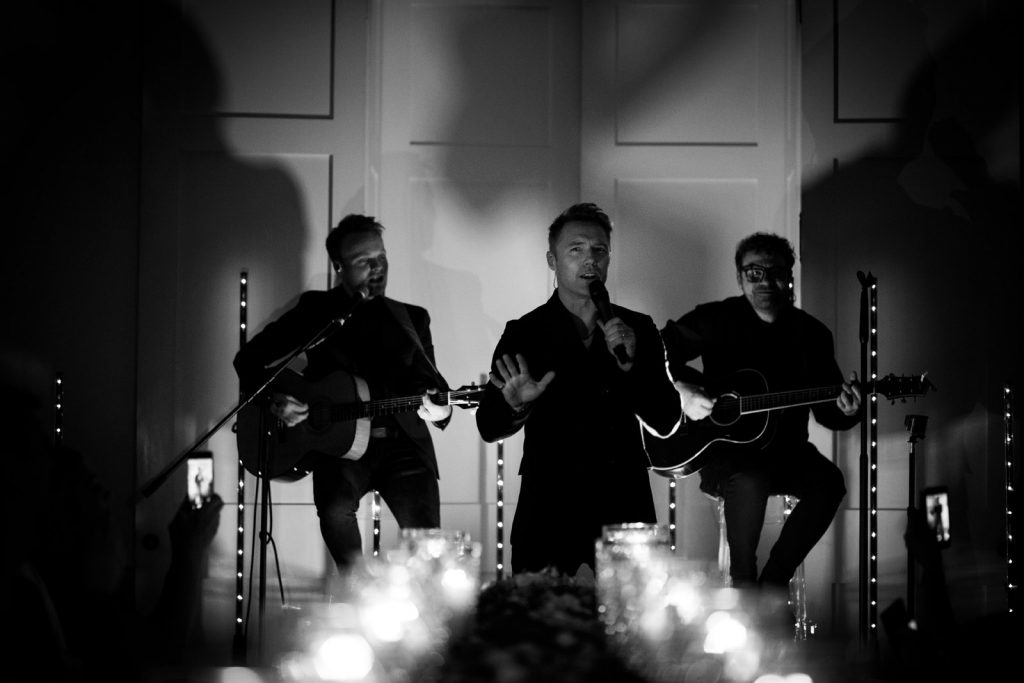 We wanted to create drama throughout the evening, so it was constant surprises throughout the night. Rather than a traditional dessert or birthday cake, we added drama by having the team design individual birthday cakes with a single rose design on top. As white-gloved waiters entered the room the drama was building as they placed down stunning glass cloche containing the cakes followed by 2 guitarists playing Happy Birthday to the birthday girl. Taking to the stage they played and as the guests joined in singing but they led straight into another song! As the double doors behind the stage opened appeared the incredible Ronan Keating to sing a surprise set for the birthday girl. The room erupted in shock and surprise and then all the guests were on their feet singing and dancing the night away. The most fabulous event both visually stunning and in design.

Teams from florals to planning, sound and lighting as well as the entertainment acts went above and beyond to create this seamless event.